Healing Power Of Art: 5 Indian Artists Whose Artwork Will Make You Feel...

Art connoisseur Ashish Anand, CEO & MD of DAG(formerly known as Delhi Art Gallery) shares a few of his favourite creations among the 51 masterpieces for sale to raise funds for the nation’s warriors leading the fight against the pandemic. After more than a month in lockdown (and counting), tempers are frayed, hope is diminishing and despair seems to be setting in.

In such a scenario, all you can do is to just heal from within and try to make a difference in whatever way you want. DAG (formerly known as Delhi Art Gallery) has come up with one such way to make a difference by organising a fundraising sale of 51 masterpieces from its collection from artists such as M.F. Hussain, Madhavi Parekh, Jamini Roy, F.N. Souza, Nemai Ghosh and more.

"We believe in the healing power of art. Even more, we believe in the power of giving. Towards this end, DAG decided to donate 51 works of art from its collection for a fundraiser, 100% proceeds of which will go to two allotted charities: PM CARES, and Lt. Governor/Chief Minister Relief Fund, Delhi. To help make this fundraiser a success, DAG decided to significantly reduce the price of these artworks, making them additionally viable for buyers, giving them the additional satisfaction of seeing the proceeds from their purchase being diverted to help the poor and support the health sector in this critical hour of need," says Ashish Anand, CEO & MD of Delhi Art Gallery (DAG).

The prices of the artworks range from INR 50,000 to INR 5 lakh. The curated selection includes only one work per artist, with works on canvas, paper, board, in oil, acrylic, watercolour and graphite, photography and sculpture. So, we asked him to share a few of his favourites that are sure to provide you with a visual relief: 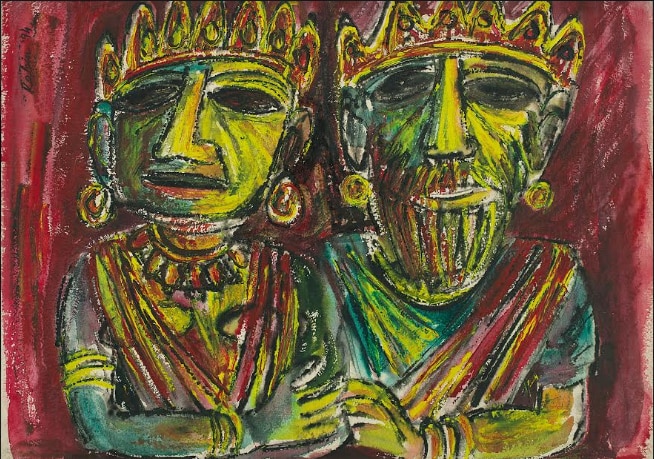 "Rabin Mondal’s attempt to create iconic figures, whether he was painting gods or mere mortals, was to remain a lifelong passion. Using a primitivist trope, his paintings were distinguished by the aboriginal features of his subjects, the rough use of colour, and deliberately unschooled lines to represent characters that are potent and otherworldly.

With King-Queen, he resorts to a lighter palette for his portrait of two apparently benign characters till one looks closely at them. One can’t help but wonder if they’ve stepped out of Shakespeare’s Macbeth, their mannerisms eerily like an ill-fated couple of the tragedy." "Madhvi Parekh’s childhood in rural Gujarat frequently permeates her work, sometimes with larger-than-life mythological figures, but most often in scenes of quaint domesticity or playful outdoor scenes. A folk-modernist, Parekh’s work was influenced by Paul Klee on one hand, and folk and traditional art on the other, developing its own language. The disregard for proportioning of images follows the tropes of folk art in which neither motifs nor picture surfaces are determined by distance- size relationship or by the relative proportions of the object images. This Untitled painting typical of the artist’s early style—composed of dots and dashes in an ode to Klee, but also using a technique in which forms (and beings) are depicted within other forms (and beings). An androgynous figure can be seen keeping animals company, seemingly with no difference between them, as intended in the natural world."

Between Vows and Words by Anupam Sud "What strikes one in Anupam Sud’s printmaking is the ‘sensuality of seeing’. Whether humans or objects, they are represented in their full-bodied corporeality—their skin and flesh, texture and volume captured most effectively by well-delineated contours in the light and dark ambience of etching. It is her eye, and an acute sense of the ‘optical’, that guides her hand in drawing out the physical reality of things. Sud remains a committed realist, even to the extent of sometimes being photographic. But the sense of realism is not reduced to a sterile function of flawless copying, but refined by an intuitive vision of the perceived object within the pictorial construction. It is far from being benign as a mere pleasurable sight to entice and relax the viewer. Sud operates outside the narrow boundaries of ‘art for art’s sake’.

In Between Vows and Words, a couple, their hands firmly intertwined, are surrounded by words such as love, tenderness, desire, purity, relation, vulnerable, freedom, physical, et cetera—all constituting the recipe for the perfect marriage. And yet, every relationship is like a game that defies stereotypical prescriptions, playing out unpredictably. Sud plays with this discord effectively created between the words and action, the text and the image." "The Untitled artwork belongs to an earlier period of experimentation in Shanti Dave’s career before the artist transitioned to the encaustic medium. However, as highlighted by the texturing and the multiplicity in layering, the transition had already begun to take shape in the artist’s mind. The pictorial space alternates between complementary light and dark regions—the sun-kissed yellow at the bottom half of the canvas broken from the dark one-third region at the top by a patch of neutral grey. Their uniformity is broken by the central mass, which is contrastingly busy with textures and the intermingling of colours. The surface appears to be made of varyingly sized blocks that imitate living and duplicating cells. This secluded mass or floating island became emblematic of Dave’s art, possibly a manifestation of the loneliness that he suffered in his own life."

"If art has its own language in which it speaks, then Rajendra Dhawan’s work is a masterclass in the meditative study of silence. Viewers and scholars have ascribed terms such as ‘spirituality’, ‘timelessness’, ‘lyrical’ and ‘musical’ to describe them for want of greater coherence. However, Dhawan himself has refrained from dissecting his own works, preferring instead to let each canvas communicate uniquely with its spectator—an aspect extended by the artist who rarely titled his paintings.

Because of the amorphousness of the artwork—seen here as patches of pinks and browns hovering over a plane of blue—the viewer is bound to draw on personal experiences for its interpretation. Because we are compulsively drawn to the familiar, it is hard to resist seeing landscapes, waterscapes, a stretching sky over a vast sea. The suggestion arises from his use of brushstrokes that seem to suggest movements of air and water. Equally, they evoke the notes of music, the sentiment of our emotions. Dhawan’s brilliance, as highlighted by this artwork, lies in his ability to evoke a multitude responses from his spectators." "Among the few women artists to practice abstraction, Shobha Broota’s works are simultaneously an ode to Indian tradition as well as colour field abstraction. The foundation of her work is based on an energy field in which the centre pulses with a palpable force. She achieves this through a form of pixilation that appears to wax and wane over the entire field of the canvas. By way of response, the viewer appears to be magnetically drawn into the painting.

Working with primary colours, the core of Broota’s painting is an invisible bindu—unlike S. H. Raza’s very visible ones—from which a radiating force appears to emanate outwards. (Conversely, one can argue that the force sucks one within it, disappearing into a funnel-like infinity.) For this, she employs geometry to great effect, bending its rules to her will to calibrate her goal. This results in a sense of motion in a field that is remarkably still—a metaphysical achievement that is no mean feat. This is a painting of rare boldness and sensitivity."

5 Reasons You Must Open Up About Intimacy With Your Partner