Bridestoday
Bridestoday | Jewellery | News | "Men Have Been Wearing Jewellery Forever, So I Think They Should Continue!"-Alexandra Yasmina Roy on Jewels, Traditional Crafts and Trends.

"Men Have Been Wearing Jewellery Forever, So I Think They Should Continue!"-Alexandra Yasmina Roy on Jewels, Traditional Crafts and Trends.

In conversation with Alexandra Yasmina Roy, Sotheby's specialist in Islamic and Indian Art, on their age-old collection of fine Nizami jewels and how they are rare finds for a bride. 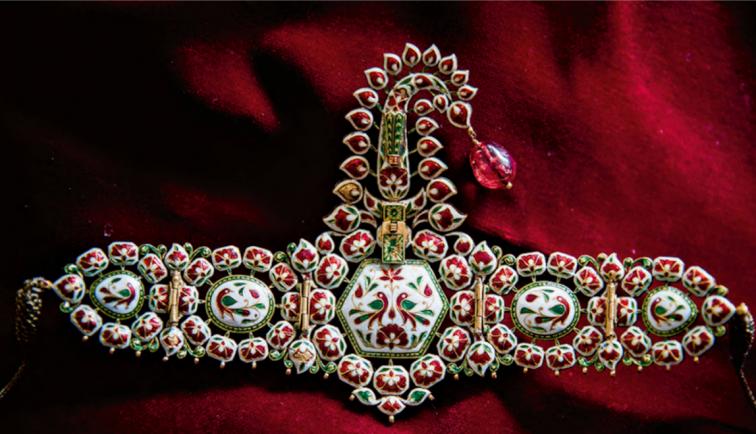 There is something evocative about vintage jewellery. We associate it with much more than just gems or design as it becomes a house of memories. Alexandra Yasmina Roy of Sotheby’s, too, has always had a soft corner for these creations. She studied art history in both the United States and London, earning a Bachelor’s degree in the subject from Wellesley College, Massachusetts, the US, and a Master’s in Byzantine Art and its interaction with Islamic empires from the Courtauld Institute of Art, London, the UK. The recent ‘Arts of the Islamic World’ auction that took place in Sotheby’s London, captured Roy’s strength in researching and cataloguing the works of art that encapsulate the best of rare heritage pieces from India’s rich Islamic history. On display were pieces like the rare drawing of the Taj Mahal by Thomas Loncroft, a selection of precious gem-sets, and enamelled jewels from India, and more. Here, edited excerpts of our conversation with the connoisseur. 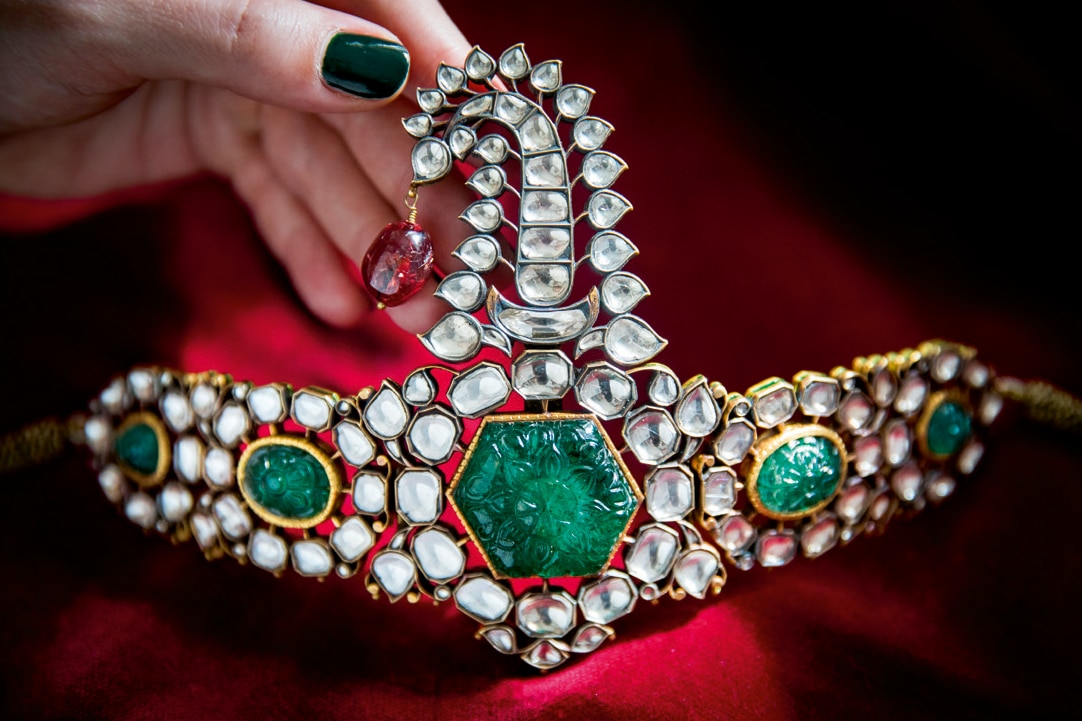 WHERE ARE THESE PIECES PROCURED FROM?

The wonderful, historic jewellery that we offer in our auctions hail from private collections from across the world, with many pieces having been passed down and inherited by their current owners. It is always a mix of clients that we have worked with in the past, and new clients who come to us and discover the value of their pieces. The auction itself spans many centuries and several continents, and that is reflected in the scope of the offering. WHAT IS THE MOST HIGHLY VALUED PIECE IN THIS YEAR'S COLLECTION AND WHAT IS THE STORY BEHIND IT?

The highest valued piece of jewellery in this year’s sale is an important gem-set and enamelled turban ornament, otherwise known as a sarpech, which is from India, probably the Deccan, in the 19th century. The estimate on this is £120,000-180,000, and this comes down to the fact that it is particularly rare to find sarpechs of this spectacular size and quality. Each emerald that is set onto the front of this imperial piece was intricately carved and of a significant thickness. Turning it over, the enamel on the reverse is outstanding—with a beautifully complex design set in bright colours on a crisp white ground. 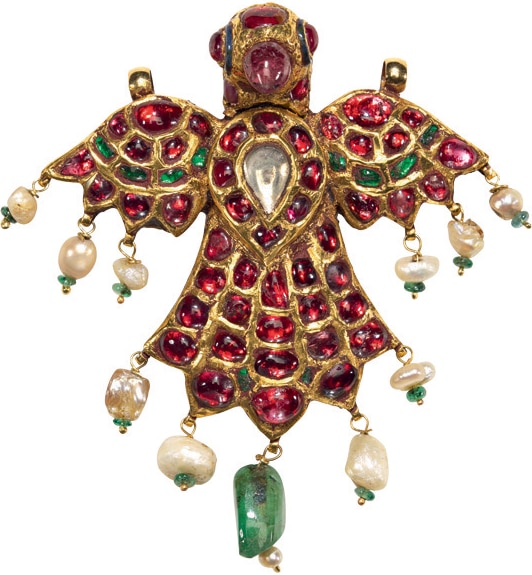 TELL US A LITTLE ABOUT THE TRADITIONAL CRAFTS USED IN THESE CREATIONS.

Most of these finely-crafted pieces were adorned with colourful gemstones in the kundan technique, in which precious stones were set into hyper-purified gold that was refined into strips of malleable foil which develops an adhesive quality at room temperature. The jewels were then placed directly into this setting, on a polished gold or silver foil that served to highlight the gemstone’s reflection and colour. This rich design was usually further enhanced with a bright enamel layer. 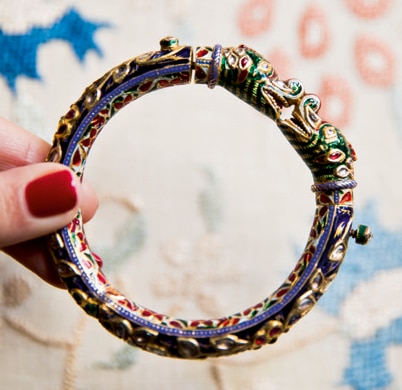 HOW OLD ARE THESE PIECES?

Most of the pieces in this sale were created in the 19th century, but in the past we have actually sold jewellery dating back to as early as the 16th century. 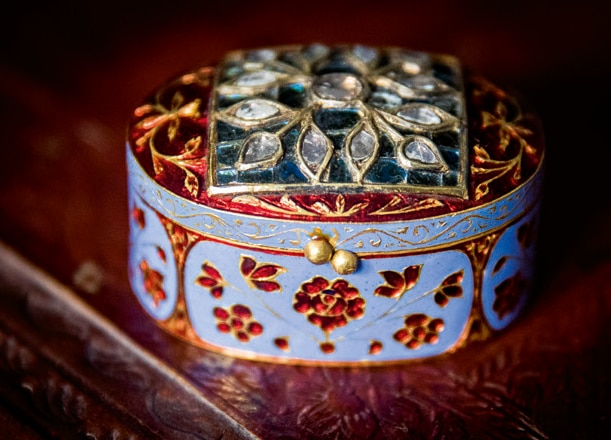 WHAT MAKES THESE STAND APART FROM THE OTHERS THAT ARE EVALUATED FROM THE SAME CENTURY?

These are particularly inventive, refined in their creation and the gemstones used are themselves precious. In order to glean the value of a piece, one has to consider it as a whole, looking at the complexity of the technique, quality of gemstones and its general refinement.

ONE THING THAT MADE YOU FALL IN LOVE WITH THESE PIECES?

For me personally, it is the intricate enamelling that I love the most. Nowhere else do you see such close care taken, particularly on the reverse of jewellery pieces, where they were not meant to be viewed by all but rather privately admired by the wearer. IF ONE HAD TO ACTUALLY WEAR THEM, WOULD YOU RECOMMEND THEM FOR A WEDDING?

The most opulent examples would certainly add a unique touch to any wedding, bringing history and glamour together on your big day. Although of course, you could wear any of the pieces whenever the right occasion arises!

Men have been wearing jewellery forever, so I think they should continue! It is sometimes the case that the jewels we offer in our sales were actually intended for men and are now bought by women, so there’s is no reason that this trend cannot go both ways.

Squat 101: Here's How To Correctly Air Squat For Toned Thighs And Glutes

From Kim Kardashian to Katrina Kaif, air squats seems to be everyone's favourite exercise to work their legs and...